Characteristics of a Jordanian Cab Driver 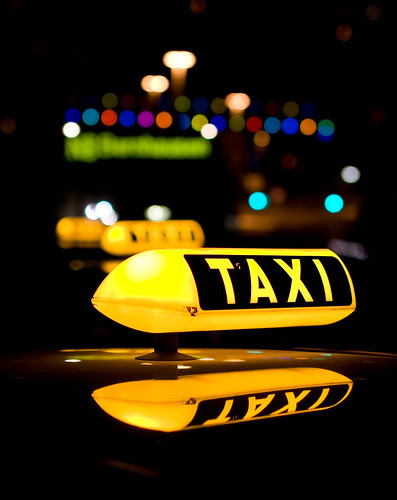 **For the record I have nothing against cab drivers, kol el nas khair w barakeh and I’m not generalizing, let’s just say most of my experiences weren’t good.
If you are Jordanian or know someone who lives in Jordan, chances are you’ve heard dozens of cab driver stories and adventures, these guys are the only variable in a daily routine sometimes, if you take a cab to work or university on a semi-daily basis, you know what I’m talking about.
So a cab driver can either add a hilarious twist to your everyday ride or he can make you, well… miserable!
Here are some of their common characteristics: 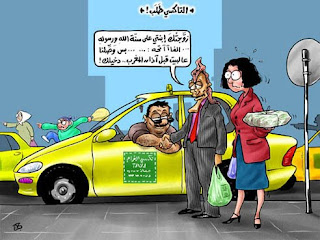 1. All cab drivers must be stored dry below 25° C, keep them refrigerated in the summer, because they will rapidly spoil in the heat. University students who take summer courses know this very well; if it’s hot outside, a cab driver will refuse to pick up passengers. Although he may agree on condition that you change the location you’re going to, for example, if you live in Shmeisani and are now at University Street, when the cab driver tells you you’re living in Khalda you have to agree, otherwise you, my friend, are sleeping in the classroom tonight, so either find a relative or a friend that lives in Khalda and go visit them at 1:00 PM, or call your parents and tell them to move to Khalda because that’s the only way you’re coming home. (Khalda residents don’t get so excited you have to move to Marj Al Hamam if he says so).
2. They all have a great grandfather who owned a huge piece of land in Jordan, died and passed it on to his 10 sons who fought over it, then they divided the land and each got his share and sold it to different people who are now really rich because that piece of land is worth millions now. It was the worst mistake in their lives. They could’ve been filthy rich by now.
3. A cab driver is your go-to guy when you’re not feeling well, he will diagnose the case and prescribe some medicine for you to get well, he’s also your guy when you need legal consultation, es2al chauffeur taxi wala tes2al 7akeem, he’s the politics expert, the religion expert, the ethics expert and the businessman. 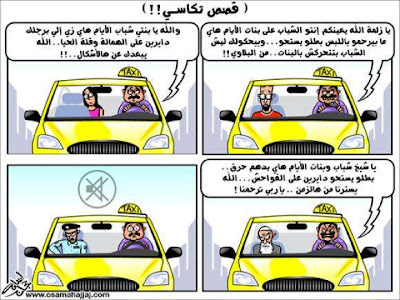 4. If you’re a girl, then all guys are jerks, if you’re a guy, all girls are “easy and cheap”, if you’re old, the youth of today is so immature and so on.
5. If he’s not listening to Mohammad Al-Wakeel, he’s not one of them, get out of the car and run for your life NOW! He could be a serial killer dressed as a cab driver.
6. And speaking of dressing like a cab driver, it’s not a dress code as much as it is a rule: always wear the same thing you wore yesterday, tomorrow you can wear the same thing you wore today. This actually reminds me of a day I was driving home from work, it was 5 PM and really hot, at the traffic light there was a cab next to me and you know how long the light takes to go green :S there was this girl inside the cab who had a tissue in her hand and she was covering her nose with it the whole time :) yeah maybe she just had a runny or bloody nose, maybe she just really likes the smell of the tissue or maybe she doesn’t like anyone to see her nose, you never know, but refer to #1 for more options.
7. No, I’m sorry but your driver cannot close the window, where would he put his arm if he closed the window? You know I never understood why drivers in Jordan stick their arm out of the window, however, here’s Ahmad Hassan Al-Zou’bi’s guide on how to analyze characters based on what their arms look like.
8. Finally have you noticed how they’re all over the place when you don’t need them? I’d be walking in the street, maybe even heading to my car and a taxi would drive by, stick his head out the window, have that “hey do you want a taxi?” stupid look on his face and honk his horn. No dude, I don’t need a taxi, if I needed one, believe me, you would know, and where were you when I spent all noon waiting for one of you to show up?
Ugh!
Posted by Rand at 2:57 PM Labels: a guide to:, Arab, Jordan, Observations
Email ThisBlogThis!Share to TwitterShare to FacebookShare to Pinterest